Well, hello there. We've been onboarding our recently announced new bass player and have added an old cover song we've not played in years to the live set. And we have a show with Questioner and Dysrhythmia. This we're looking forward to, because we can try and redeem ourselves from playing a crap set the last time we supported Dysrhythmia.
We've not posted some live pics in a while, but that situation is rectified here.

We're hitting the road with Drones for Queens in September for a weekend. One of the dates suddenly changed, but the updates are in the Shows section.

So Scott Harney unfortunately had to leave the band because of real life intruding in the form of the day job. But Ivan Khilko of the band Forgetting has taken over on the four string.

Here we are after playing our first show with him, in Washington DC. (photo: Cybelle Kelly) 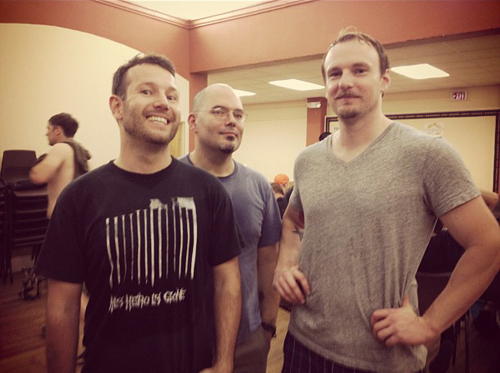 Hello, guys and dolls. Just letting you know that we're gearing up to be one of the opening bands for grind kings Phobia when they come through town, and then we have a couple other shows after that. We're also writing some new stuff——two songs are complete.
- Richard

The LP version of Corroded is out now. Please get in touch if you'd like to get one.
- Richard

We have a show in NYC, and the fine people at Brooklyn Vegan took the opportunity when writing about the show to write about us here.
- Richard

It's been radio silence for a while from us, but we've been busy of late. We have a show confirmed and are working on more, we're working on some new songs, and most importantly the LP version of Corroded is being pressed! We'll make another announcement when it's actually out.
- Richard