November 2, 2016:
Our frontman is playing in a Sepultura cover band called Clenched Fist, and they have a show with the great Congenital Death in Philly. Here's the event on Facebook!

August 1, 2016:
We've added links to more sets of live pics from Baltimore City Paper and Return to the Pit.

March 9, 2016:
A couple anniversaries of the release of our records passed by last month. Our Decibel flexi came out last year in February and Corroded full-length came out in February of 2011.

February 5, 2016:
We've put our tracks and lyrics from Relapse's This Comp Kills Fascists Vol. 2 up on our Bandcamp. Check it out! 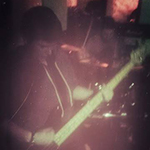 January 19, 2016:
Happy post MLK day. Taryn has once more stepped down from the four-string spot. She's left to concentrate on other things. Her presence will be felt on our next record: we were writing riffs for new songs of late with Taryn and we'll keep those riffs on hand.

To fill the spot, our old bass player Ivan is back in the band. It's good to have the guy back.